Ian Thorpe, seen here attending the World Swimming Championships in Melbourne over the weekend, told Good Weekend magazine that speculation about his sexuality began when he was a teenager and was an attempt to smear him: 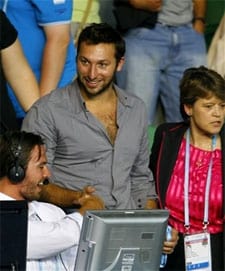 “I became a gay icon when I was 15, which was a little bit weird. When I was 17, everyone had started that speculation about me, though I didn’t hear about most of it. I don’t have a problem with being a gay icon, it’s not a big deal to me. But I think the gay speculation, along with when I was accused of taking drugs in 2000, was an attempt to pull me down from the top. Some people think it’s an insult to say, ‘Oh I think he’s gay’, but I don’t take it that way. I’m not gay. I’m lucky that within myself I don’t care enough to get worried or upset over it.”

Australian website Same Same reports that the magazine asked Thorpe, hypothetically, if he were gay, would he come out? Said Thorpe: “I have no idea, because I’m not gay. I don’t think anyone should have to be asked that question. You don’t have to come out and declare you’re straight. It shouldn’t be a big deal today, but people still get hang-ups over it.”

The swimmer also dismissed comments that his fashion choices put his sexuality into question: “Guys are just guys, girls are just girls, all of us are different. Some guys are more in touch with their feminine side, interested in design and quirky things, some are blokey blokes.”

Thorpe, who announced his retirement last November, attended the World Swimming Championships in Melbourne over the weekend as an observer, not a participant. He’s currently preparing to produce and host a series of shows on Australia’s FOX network on climate change and environmental issues.

You may have missed…
Ian Thorpe: Gay Rumors No Big Deal [tr]