Max Blumenthal from The Nation produced a short “unauthorized documentary” of his trip to the Conservative Political Action Conference (above). It features appearances by Ann Coulter, Michelle Malkin, Grover Norquist, Mitt Romney, Tom Tancredo, and others and is well worth the 7+ minutes of your time.

Political figures were quick to respond to Coulter’s comments on Friday about Senator John Edwards: “I was going to have a few comments on the other Democratic presidential candidate John Edwards, but it turns out you have to go into rehab if you use the word ‘faggot.'” 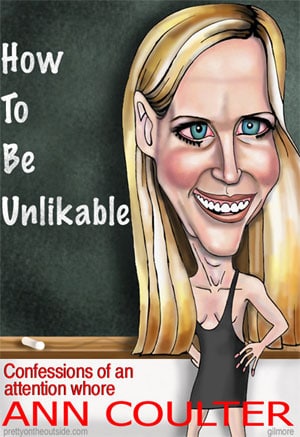 Amy Ridenour, president of the National Center for Public Policy Research which co-sponsored the CPAC conference said: “Ann Coulter not only once again went out of her way to use a nasty epithet, she pushed her offensiveness up a notch. We conservatives have enough trouble overcoming the false things that are said about us without paying for a platform upon which we shoot ourselves annually in the foot.”

John Edwards issued this statement: “The kind of hateful language she used has no place in political debate or our society at large. I believe it is our moral responsibility to speak out against that kind of bigotry and prejudice every time we encounter it.

And Ann Coulter responded to the outrage on her website: “I’m so ashamed, I can’t stop laughing.” Coulter also commented to the New York Times about the Republican response to her comments, saying “C’mon, it was a joke. I would never insult gays by suggesting that they are like John Edwards. That would be mean.”

Howard Dean was quick out of the gate to condemn Coulter’s comments on Friday: “There is no place in political discourse for this kind of hate-filled and bigoted comments. While Democrats and Republicans may disagree on the issues, we should all be able to agree that this kind of vile rhetoric is out of bounds. The American people want a serious, thoughtful debate of the issues. Republicans — including the Republican presidential candidates who shared the podium with Ann Coulter today — should denounce her hateful remarks.”

Democratic Sen. Edward Kennedy issued a statement: “Ann Coulter’s words of hate have no place in the public sphere much less our political discourse.”

And it wasn’t just political figures speaking out against the pundit. Recently out former NBA player John Amaechi said: “Yesterday, Ann Coulter, in a speech before the Conservative Political Action Committee, used the ‘F’ word that has long been used as a hateful and harmful slur against gay people. I have worked as a youth mentor since I was in college, and in the weeks since I publicly came out I have heard from young people from all over the globe. Coming out and living openly can be challenging – and that challenge only grows when people like Ann Coulter mockingly use it as a cheap joke. Words have power – and this word in particular has a ricochet effect, as it emboldens bullies in the school yard, in the work place, and on the streets, and tells them that this kind of hate speech is ok. Ann Coulter knows better, yet continues to disparage the GLBT community. The people in the room with her yesterday would do well to speak out loudly against her remarks and more importantly her sentiment and send a message that harmful slurs never have a place in the public discourse.”

And Republican presidential candidates attempted to distance themselves but fell short of flat-out condemning the remarks:

Mitt Romney’s spokesman Kevin Madden said, “It was an offensive remark. Governor Romney believes all people should be treated with dignity and respect. Political discourse ought to be more substantive and thoughtful.”

And Rudy Giuliani echoed his fellow candidates: “The comments were completely inappropriate and there should be no place for such name-calling in political debate.”

Republican candidates Sam Brownback, Mike Huckabee, Tom Tancredo and Vice President Dick Cheney, who also attended the CPAC conference where Coulter made her remarks, have not yet, to my knowledge, crafted public responses.