Utah’s shameful anti-gay school club laws set to take effect: “Next month, a 17-page law will take effect governing just about every nuance of public school extracurricular clubs, from kindergarten jump rope to high school drama. How groups can form, what they can discuss in their meetings, who can join, and what a principal must do if rules are violated are addressed. But the school clubs law, signed last week by Gov. Jon Huntsman Jr., was not really intended to rein in the rowdies down at the audio-visual club, some lawmakers said. The real target was homosexuality. ‘This is all about gay-straight alliance clubs, and anybody who tells you different is lying,’ said State Senator Scott D. McCoy, Democrat from Salt Lake City, who voted against the law.” 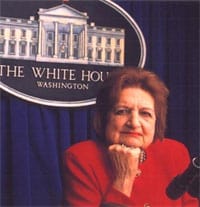 Despite the fact that Bush promised of Valerie Plame leak “I want to get to the bottom of this. If there is a leak out of my administration, I want to know who it is,” a White House official revealed at hearings late last week that (surprise!) it was never investigated.

New York City Council Speaker Christine Quinn makes St. Patty’s Day statement in Dublin. Quinn: “The fact I’m here in Dublin and able to march and participate in inclusive events should send a message of how backwards the New York parade is. John Dunleavy obviously isn’t interested in compromise. Last year he said allowing gays and lesbians into the parade would be the equivalent of letting the Ku Klux Klan march in a civil rights parade or the Nazis march in an Israeli Day parade. But he only represents a very small minority of people in the Ancient Order of Hibernians, so we eventually will get beyond this. The vast majority of AOH members, like the vast majority of Irish New Yorkers, are open-minded.”

Staten Island playwright presents Boys Just Wanna Have Fun about a NY cop who falls in love at a SI gay bar. Anthony Wilkinson: “Staten Island has a true reputation of being conservative and Republican and homophobic. Nobody who is gay in Manhattan, or even in Jersey, is going to run to Staten Island to spend the night in a gay bar. But as a whole Staten Island is very family-oriented, and that’s one of the positive things about it.”

Decorated war veteran and Pennsylvania congressman Jack Murtha responds to Dick Cheney’s assertion that a withdrawal from Iraq would result in chaos: “Why would I believe that? I mean, all the things that they have predicted have — everything I predicted turned out to be true. Nothing they predicted turned out to be true. Why would I believe there’s going to be chaos in the Middle East just because they say it? The Iraqis don’t believe that. The countries on the periphery don’t believe that and the public doesn’t believe it. The public wants us out. They spoke in the last election.”

Is this how Paris Hilton persuades other artists to let her cover their singles? (warning: NSFW)

Corrupt politicos do battle as Tom Delay slams Newt Gingrich, citing Clinton impeachment. Delay: “It is now public knowledge that Newt Gingrich was having an affair with a staffer during the entire impeachment crisis. Clearly, men with such secrets are not likely to sound a high moral tone at a moment of national crisis.”