AIDS has only been around, of course, for 25 years, so why should John McCain be expected to have a position on it? 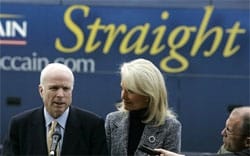 On a tour bus in Iowa on Friday, McCain was posed with a few questions regarding his position on the distribution of taxpayer-subsidized condoms in Africa, as well as grants for sex education in the U.S., and finally, whether or not contraceptives help stop the spread of STDs.

Here’s how the dialogue went, according to The Caucus blog:

Q: “I mean, I think you’d probably agree it probably does help stop it?”

Q: “But you would agree that condoms do stop the spread of sexually transmitted diseases. Would you say: ‘No, we’re not going to distribute them,’ knowing that?”

Mr. McCain: (Twelve-second pause) “Get me Coburn’s thing, ask Weaver to get me Coburn’s paper that he just gave me in the last couple of days. I’ve never gotten into these issues before.”

As of early 2006, AIDS has killed over 25 million people worldwide, according to the World Health Organization. The “Straight Talk Express” rides again…