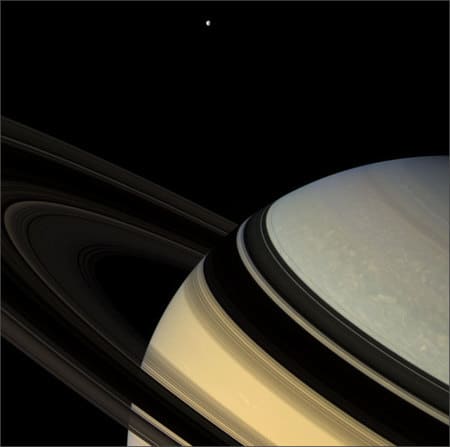 The $3.3-billion U.S. Cassini mission, funded by NASA and the European and Italian space agencies, recently sent back these stunning images the Cassini craft snapped while in an inclined orbit around the planet Saturn over the past two months. 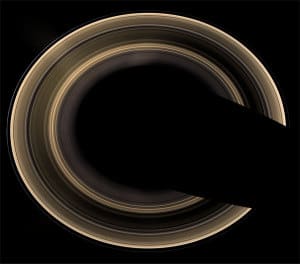 The Cassini mission is the most comprehensive imaging project of a body in the outer solar system ever undertaken. Upon release of these recent photos, more of which can be seen here, Cassini scientist Carolyn Porco said, “Finally, here are the views that we’ve waited years for. Sailing high above Saturn and seeing the rings spread out beneath us like a giant, copper medallion is like exploring an alien world we’ve never seen before. It just doesn’t look like the same place. It’s so utterly breath-taking it almost gives you vertigo.” 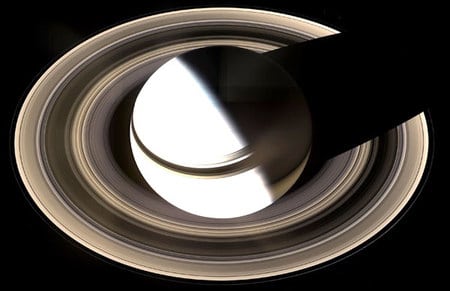 The short film below, also just released, shows a ringplane crossing, made by Cassini twice every orbit. What you are seeing is the view from the spacecraft as it moves from the sunlit to the unlit side of the rings. For a full appreciation of the film, in which two of Saturn’s largest moons can also be seen, follow the jump.

“This life-like movie sequence captures Saturn’s rings during a ringplane crossing — which Cassini makes twice per orbit — from the spacecraft’s point of view. The movie begins with a view of the sunlit side of the rings. As the spacecraft speeds from south to north, the rings appear to tilt downward and collapse to a thin plane, and then open again to reveal the unilluminated side of the ringplane, where sunlight filters through only dimly.

The striking contrast between the sunlit and unlit sides of the ringplane can now be fully appreciated, thanks to the sense of continuity in time and space provided by this brief clip.

The movie consists of 34 images taken over the course of 12 hours as Cassini pierced the ringplane. Additional frames were inserted between the original images in order to smooth the motion in the sequence — a scheme called interpolation.

Six moons careen through the field of view during the sequence. The first large one is Enceladus, whose slanted motion from upper left to center right nicely illustrates the inclination of its orbit with respect to the rings. The second large one, seen in the second half of the movie, is Mimas, going from right to left.

This movie begins with a view looking toward the lit side of the rings from about 9 degrees below the ringplane. It ends when the spacecraft is 8 degrees above the ringplane.

The clear filter images in this movie sequence were taken with the Cassini spacecraft wide-angle camera on Jan. 17, 2007 at a distance of approximately 900,000 kilometers (500,000 miles) from Saturn. Image scale is 48 kilometers (30 miles) per pixel.”

Previous Post: « Vigil for Andrew Anthos Tonight; Sketch Released of Killer
Next Post: The Guys in Wild Hogs are So Not Gay »