The latest Anderson Cooper talk to hit the internet, thanks to Janet Charlton, is that the CNN news anchor showers in his underwear to avoid the possibility of having his manhood captured on a camera phone. 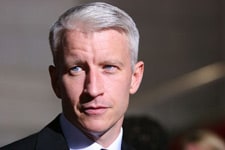 In the interest of correcting this claim, a source close to Towleroad who is also a member at the Time Warner Center Equinox gym and has seen Mr. Cooper in action reports that he does not shower in his underwear, but that he is one of those “towel wrap, slip the undies down underneath” kind of guys.

Tipster also reports that he is very, very pale but couldn’t tell much else from “the view through the frosted glass door.”

Or maybe that should be the frosted glass closet?