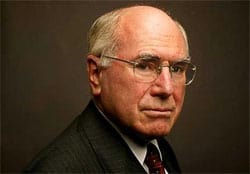 “My initial reaction is no [HIV-positive people should not be allowed in]. There may be some humanitarian considerations that could temper that in certain cases but prima facie – no…I think we should have the most stringent possible conditions in relation to that nationwide…”

According to Australian site Same Same, it’s “just the latest in a series of regressive moves” from Howard: “HIV legal campaigners have this afternoon said that Howard should be investigated for discriminating against people with the virus…Current Australian immigration rules require permanent residents to have a HIV test, but a positive result does not mean that a person’s visa would be denied.”

you may have missed…
Elton John to Australian PM John Howard: “Up Yours” [tr]
Aussie Prime Minister John Howard: I’m Not Anti-Gay [tr]

Previous Post: « Singer and Van Sant Vie to be First with Harvey Milk Film
Next Post: Clay Aiken on Mission to Afghanistan »