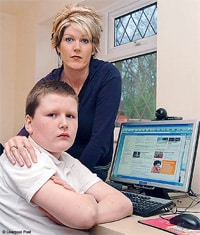 Two British parents, in fear that their son was being bullied at school, called police after their 10-year-old son received an email from another student (pictured, with his mother) calling him a “gay boy”. Officers were sent to the school the boys attended. The school directed them to the home of the student who had sent the email. No further action will be taken, according to the police, but the incident would be recorded.

Officers defended the visit, claiming it was behavior by the student that had been “ongoing”.

In related news, a study of 7,500 U.S. youths between the ages of 14 and 22 by Children’s Hospital Boston revealed that gay and lesbian teens are three times more likely to report bullying by their peers than heterosexual teens.

Previous Post: « Massachusetts Gov. Patrick Orders 26 Gay Marriages Recorded
Next Post: Terry McMillan: The F-Word is the Only Weapon I Have »