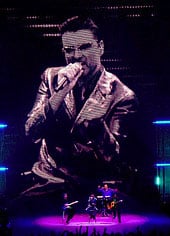 A judge today ordered George Michael to court on June 8, the day before he is set to perform a massive concert at London’s brand new Wembley stadium.

Michael is to be the first artist to play the new stadium, which seats 90,000. But first he’ll have to appear at the opening of his trial for driving under the influence of marijuana. Last October, Michael was found slumped behind the wheel of his car in a haze of cannabis for the third time in eight months.

Said judge Katherine Marshall: “He is around in the area because I believe he is appearing at Wembley Stadium. I do not think he will have any difficulty in being here on June 8.” Marshall said she would allow him to skip the main portion of the trial and reappear again at its conclusion.