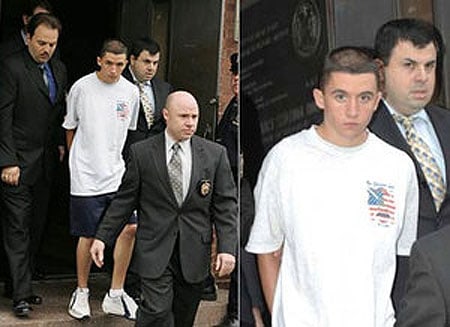 For all our coverage on the Michael Sandy murder, click here…

It was revealed on Friday in court, at hearings over the murder of gay Brooklyn designer Michael Sandy, that one of Sandy’s killers is the son of John Fox Sr., a high-ranking battalion chief in the New York Fire Department who was honored as a hero for saving a fellow rescue worker in the dangerous smoking pit at the bombed World Trade Center parking garage in 1993.

According to the New York Post, “[The younger] Fox, a cadet at SUNY Maritime College in The Bronx, took the stand Friday in an effort to demonstrate that his oral, written and videotaped confessions to the Oct. 9, 2006, incident were wrung out of him during seven hours of grilling by detectives. But prosecutor Anna-Sigga Nicolazzi countered that Fox’s sense of duty should have motivated him to tell the truth right away – and to prove her point quizzed him about his Navy ROTC studies and his Bravest dad.”

The now-retired battalion chief’s achievements were confirmed by firefighters: “In 1993, dangling from a rope, he was lowered into a smoldering crater in the bombed-out World Trade Center parking garage to help rescue a fellow smoke-eater. He was awarded the James Gordon Bennett medal for heroism – the department’s most prestigious honor, which is given to only one firefighter each year.”

John Fox, according to reports, was questioned at length on Friday in an apparent effort by his attorneys to have his confession statements thrown out by showing that the youth was improperly questioned following the Sandy murder.

Fox, along with three others, lured Michael Sandy via an internet chat room to a parking lot on the Belt Parkway where he was robbed, and, following a scuffle, forced into oncoming traffic. He was then hit by a car and sustained injuries that would keep him in a coma until his family later made the choice to remove him from life support. Sandy died October 13.