Last December, after a series of marketing efforts that appeared to hype Zach (played by Thomas Dekker), one of the characters on the hit show Heroes, as gay, NBC suddenly appeared to pull the plug on it.

Now, Heroes executive producer Bryan Fuller tells website popgurls the story behind the controversy and reveals that Dekker’s manager said she would pull him from the show because he was up for a role on FOX and she was afraid that his playing a gay character would affect the network’s decision to hire him.

Says Fuller: “[Making Zach gay was] absolutely was a path that we were going to take. In the first meetings when we were sitting down and talking about the show, one of the things about the show that Tim said that he wanted all these characters to represent different people in the world and we had an Asian guy and an Indian guy and… a whole bunch of white people. He just wanted it to be a united Benetton cast. I said that’s fantastic, but if we have this many people, then we need to have a gay character. If you want to represent the world, that’s certainly a demographic that we need to hit. [Tim completely agreed and] was thinking Claire’s best friend might be a good person – and I couldn’t agree more. So we were definitely going down a route of making [Zach] the gay character and having him have a big role in her life and sort of teaching her to come out about her ability and embrace herself and actually using the coming out metaphor and the gay metaphor in that instance as a fun piece of storytelling.” 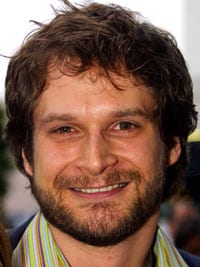 He adds: “There was an unfortunate miscommunication and when the script arrived that had the line in it, ‘I would take you to homecoming but you have to know that I don’t like girls that way.’ The actor [Thomas Dekker]’s, manager threatened to pull him from the show because he was up for the John Carter role in The Sarah Connor Chronicles and she didn’t want him playing a gay character because it might affect FOX’s interest in hiring him. It got really ugly…

…It’s unfortunate and really – we only took one line out of the script. In really, in all of our minds, the character was still gay but we couldn’t say it explicitly. I was very upset by it – I was not happy about it at all. There were times I had to avoid talking about it because we didn’t want to have a negative reflection on the show. The show’s been such a positive experience for so many people, we didn’t want to get hung up on the fact that one actor’s management felt that it was a career killer for him to play a homosexual which, as a gay man, I found incredibly insulting. We had episodes planned for him to be in, and she pulled him from the show altogether. So that’s why he sort of disappeared.”