Making a pronounced effort to show that he has the backing of the gay community, Democratic presidential candidate John Edwards released a list of 25 gay leaders on Tuesday, announcing that they have endorsed his campaign. 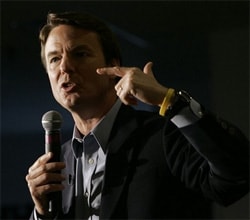 Said Edwards, “They work hard every day to make our country a better place and I am proud to join with them to fight for equal rights for all Americans.”

A notable name on the list was the presence of political strategist and activist David Mixner, whose relationship as a fundraiser and advisor for Bill Clinton became strained after Clinton presented his “Don’t Ask, Don’t Tell” policy and Mixner publicly protested it in front of the White House.

Mixner told me he’ll be posting an endorsement of Edwards on his website later today.