Roseanne Barr issued a series of apologies yesterday for comments she made on a radio show which she regularly co-hosts. In her comments, which you can read here, Barr called politically active gays “narcissistic,” saying that, like Evangelicals, gays and lesbians only care about themselves, particularly on a political level. 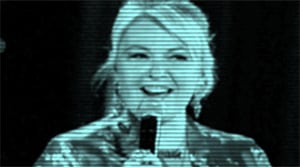 On her blog under a post entitled “My Bad”, Barr said she was sorry for the comments, and urged folks to call into her radio show and “let [her] have it”:

“I deeply regret that I have offended gay people. I said things that I do not really mean, before I had thought them through… I was wrong and I seriously apologize! Call me up today and let me have it! I will apologize and try to make clear what I really meant to say… which was that everybody needs to unite right now, and step outside of their own neighborhoods, groups, races and classes to stop Bush’s war on our country and our people. I love gays and I hate division. I am just a big idiot with a big mouth sometimes. I will learn to be more careful! Please forgive me, I am so sorry!!!! Call (909) 888 – 5222 between 5 – 6 pacific time to give me your two cents.”

Later, she clarified her apology with a second note of contrition and a call to action:

“The leaders of gay groups need to align with the leaders of Acorn, and other groups of poor and desperate Americans and fight against those who oppress all of us! I have met too many gays who are Republicans, and I cannot understand how they could choose that! Let’s all leave our own bedrooms, kitchens, neighborhoods and groups and meet each other to form a diverse army that stands for Democracy and Economic Justice!!!! (Again I apologize for any pain or hurt I have caused those whom I have always loved and befriended).”