Laguna Beach star Jason Wahler was arrested in Seattle over the weekend for the fourth time in nine months. This time for trespassing and assault. 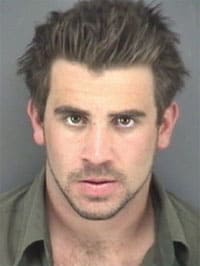 According to TMZ, “On March 6, Wahler was sentenced to 60 days in an L.A. County Jail, and must turn himself in sometime before May 4 to begin serving time for roughing-up a tow truck driver. Later this month, he’s due in court in North Carolina to answer to charges of resisting a public officer during an underage drinking sweep. He was also busted last August on cocaine possession and other charges in New York City. Busy boy! Wahler’s legal troubles now extend to four states including New York, California, North Carolina, and now Washington.”

If that (and the recently reported existence of a sex tape with co-star Lauren Conrad) isn’t enough, Wahler has also revealed himself to be a racist bigot, TMZ reports: “Officer DePina, who wrote the report, says when Seattle PD arrived they found a ‘very intoxicated’ Wahler passed out on the floor in a hallway on the third floor. When DePina tried to take Wahler into custody, the former reality star allegedly lashed out, calling the arresting officer ‘a nig**r, a fag**t, and a poor f**k.’ According to DePina, Wahler also stated, ‘that he was rich and would have my ass.’ Wahler, who was described as ‘belligerent and hostile,’ allegedy threated DePina a second time, saying, ‘Come down to L.A. county and get your ass kicked!'”

Maybe he’ll show his Paris Hilton “no accountability” card and get out of jail free.