Campaigning in New Hampshire, former Massachusetts governor Mitt Romney reacted to his successor Deval Patrick’s decision to record 26 marriages that Romney had declared invalid on the basis of a 1913 law that forbids out-of-state couples from marrying in Massachusetts if those marriages wouldn’t be recognized in their home state. 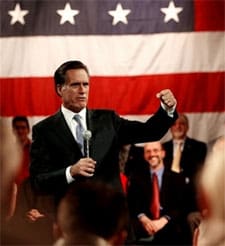 Romney told the New Hampshire Union Leader: “As the governor of Massachusetts having seen the advent of same-sex marriage in my state, and recognizing that with the new governor, people are going to be coming to Massachusetts, getting married in Massachusetts and then going home to their home states, it strikes me that you have to have a national standard.”

Romney said that Patrick acted “in contravention of the law” by ordering the Department of Public Health to record the marriages.

He predicted that Patrick’s actions would lead to a Supreme Court showdown when an out-of-state couple gets married in Massachusetts, goes back to their home state, and demands the marriage be recognized.

Said Romney: “At that stage, the Supreme Court could say it’s not valid, it’s null and void. But to me the most sure way to preserve the traditional marriage is by having a federal amendment…Marriage is not an activity that goes on within the border of a state. It is a status, a marital status, and therefore, somebody who becomes married and moves to Ohio will be seen in the eyes of many as being married.”

On an unrelated topic, Romney recently caught flak from critics by continuing to promote himself as “a hunter”. In a Q&A session on Tuesday, he reportedly boasted to a man in an NRA cap, “I purchased a gun when I was a young man. I’ve been a hunter pretty much all my life.”

Yet, according to the Associated Press, Romney’s hunting experience is far more limited than his statement might suggest: “the former Massachusetts governor’s hunting experience came during two trips at the bookends of his 60 years: as a 15-year-old, when he hunted rabbits with his cousins on a ranch in Idaho, and last year, when he shot quail on a fenced game preserve in Georgia.”