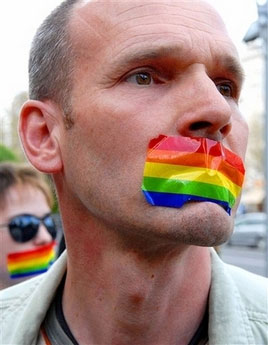 Gays in Moldova assembled outside the capital of Chisinau’s City Hall on Friday with rainbow stickers taped over their mouths to protest the government’s ban on gay pride events in that city. It is the third year in a row that officials in the small country sandwiched between Ukraine and Romania have upheld the ban on the event. 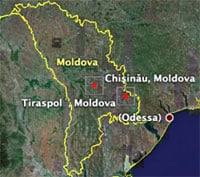 In mid-April, the nearby city of Tiraspol welcomed the rejected marchers to their city.

Moldovan activists called to activists in London to join them in protest on Friday: “We can take no more abuse of our dignity, self-respect and belief in human rights ideals that we cannot let go. The idea is to go out with brooms in specifically marked T-shirts to ‘sweep out’ homophobia from our country. We are writing to you because Moldova has an embassy in your country. We therefore ask you to manifest the solidarity with us and around the same time, 15.00 your local time, on Friday 27th April, as we go on the Chisinau streets (despite security risks). Protest before the Moldovan embassy in your country, preferably with brooms, but if that is not possible you can let your activist imagination flow!”

Moldova became independent from the Soviet Union in 1991.