Peter Tatchell, the UK’s most well-known activist for human and gay rights and the co-founder of UK group OutRage!, talks to the Guardian about what drives him: 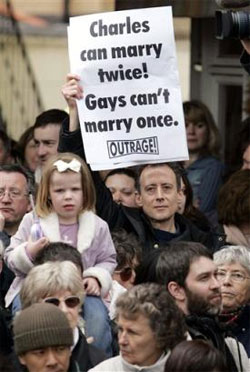 On why he does it: “The motive of my campaigning is love. I love other people. I love justice. I don’t like seeing other people suffer. I think to myself: that could be me, my sister or my neighbour. Since I wouldn’t like my family or friends to suffer, it would not be right for me to ignore or tolerate other people’s suffering.”

On what inspires him: “To me, protest is a means to an end, not an end in itself. Much of my inspiration comes from Mahatma Gandhi, the Suffragettes, and Martin Luther King. Their model of direct action protest is a proven, highly effective way of challenging injustice. Sometimes you can get change by writing a letter or lobbying an MP; occasionally governments will listen to campaigns and petitions; but there are also often moments when those in power ignore public will and popular views, and in those circumstances direct action can be a very effective way of bringing about change.”

On outing: “Contrary to the way it’s often been portrayed, I’ve never endorsed the blanket outing of people just because they’re gay. If someone is gay and they’re not harming anybody else, leave them be, but if someone is a public figure and they’re abusing their power and influence to hurt and harm other gay people, then that’s hypocrisy and it deserves to be exposed.”

Read the rest of the lengthy profile here.