Two years of planning by the Philadelphia Gay Tourism Caucus with support from the City of Philadelphia, Washington Square Civic Association, and Philadelphia City Councilman Frank DiCicco came to a head yesterday as Philly marked its gay neighborhood, now designated the “gayborhood”, with 36 rainbow street signs, installed from Chestnut to Pine Streets between 11th and Broad Streets. 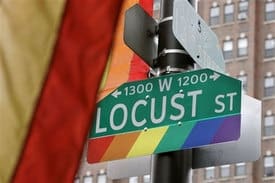 Said DiCicco: “This sends a message to the region, country and world that Philadelphia is very diverse. This is a tribute to gay people and people who aren’t that they have a willingness to live and work together.”

According to the Philadelphia Daily News, “The Philadelphia Gay Tourism Caucus estimates that the travel market for gay and lesbians is a staggering $54 billion. And Philadelphia, organizers say, should see a healthy share of that money, given the gay-friendly clubs, restaurants and other establishments dotting the newly designated district. The more immediate impact, however, is this district serving as a sensitive bastion for gays and lesbians.”

In a press release regarding the unveiling yesterday at 13th and Locust Streets, organizers made it clear that this was to be the city’s gayest ceremony of the year: “After a short program, the Philadelphia Gay Men’s Chorus will sing ‘Somewhere Over the Rainbow’ while confetti cannons shoot rainbow colors into the air.”