Zimbabwean President Robert Mugabe will have his honorary degree from the University of Massachusetts revoked if students have their way. The Undergraduate Student Senate plans to present a request to trustees of the university at their June board meeting. 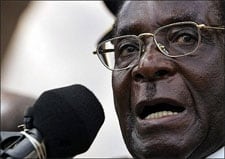 Mugabe is “far from a person students should emulate” student senator Alex Kulenovic told the Boston Globe. In 1986, when the school awarded him the degree, Mugabe was outspoken against apartheid, but has since “turned his back” on that racial harmony and committed a string of human rights abuses in addition to spearheading the economic corruption that has left Zimbabwe with the highest inflation rate in the world.

The African leader is also well-known for his anti-gay activites and rhetoric. Last year, Mugabe threatened to arrest any clergy caught performing gay marriages in that country, saying “Leave whites to do that.”

Still, the revocation of the degree could be a challenge as the university has no policy in place to do so.