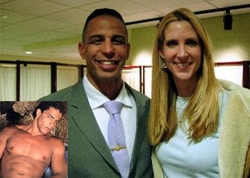 Sanchez was notified of the new allegations via email on March 22, and told the Military Times last week that they were “demonstrably false”.

MobCom commander Brigadier General Darrell Moore, who will reportedly decide where the investigation goes from here, received a letter from Sanchez in March, according to the Marine Times:

“Sanchez said he’s never done anything to bring dishonor on the Corps since enlisting and that ‘my past is behind me…The Marine Corps is a conversion experience, what men were before they joined is not as important as what they become,’ Sanchez wrote.”

Sanchez also did a brief interview with Radar Online today, in which he declares, “Gay men are like fundamentalist Muslims. If you leave their religion they have to send out a fatwa and demand your execution.”

Previous Post: « Rearview Mirror: Looking Back at the Week on Towleroad
Next Post: EMI and Apple Drop DRM and Offer Premium-Quality Audio »