A gay couple who sold their pub in Trowbridge, Wilts UK were surprised to find a sign posted outside the pub by its new owners. The sign advertised, “Faggots and mince not on the menu.” 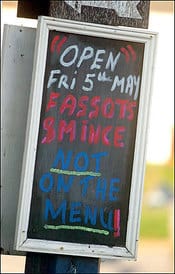 Former landlord John Williams knew exactly what it was getting at: “I was fuming. I knew they were talking about us. They were referring to gays mincing and that we’re faggots. It’s taking the mickey out of every gay person in the town.”

New owner Ady Taylor blamed the posting of the sign on a construction crew that had been working there. Said Taylor: “We had builders around and I think it may have been them. I think it was just a prank, but I did take it down.”

According to The Sun: “Section 5 of the Public Order Act states it is an offence to display any sign that is threatening, abusive or insulting. Sgt Matthew Armstrong, of Trowbridge police, said: ‘Allegations were made of homophobic connotations. The sign could be taken to mean that gay people were not welcome in the pub.'”

In February, another British pub was pressured to drop one of their menu items — “FAGGOTS – LOCALLY MADE! Swimming in onion gravy served with mushy peas and mash” — following a customer complaint.