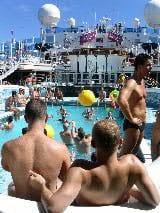 Reports the San Francisco Chronicle: “The San Francisco owner of Gay.com, along with the Advocate and Out magazines, disclosed this week that it will run out of money before the end of the year without an infusion of cash. The dire situation is a consequence of PlanetOut’s declining subscriptions for personal ads, a shortfall in advertising revenue and trouble booking passengers on its gay-oriented cruises. A dismal first-quarter earnings report on Wednesday hammered the reality home. Virtually every piece of the business needs fixing, according to management.”

PlanetOut’s CEO Karen Magee told analysts late last week: “This is deeply disappointing and concerning to me and the rest of the management team. We’ve got major work to do at PlanetOut to generate the healthy revenue growth and solid earnings performance that I believe this company is capable of producing.”

The company’s financial situation is grave, reports the paper: “PlanetOut is under the gun to come up with an additional $15 million to meet the terms of an existing loan, or face default. If it’s unable to get the financing, the lender could foreclose on PlanetOut’s assets, a potential death knell. The company, which had $11 million in cash and short-term investments at the end of the first quarter, said it would run out of money by year’s end without additional financing.”