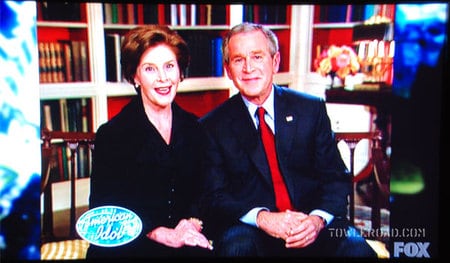 President Bush and Laura Bush made a valiant attempt to attach themselves to the fundraising juggernaut that is Idol Gives Back, last week’s fundraising show for impoverished children which raised more than $70 million.

GEORGE: Good evening. Laura and I are pleased to join you tonight and thank you for raising millions of dollars for children living in poverty in America and Africa.

LAURA: Because of your generosity, African children will receive bed nets to protect against malaria, and some of America’s poorest children will get medical care and healthy food.

GEORGE: We thank all American Idol viewers who have shown the good heart of America, and we thank all the celebrities who participated – including Bono – and all the contestants who sang their hearts out for these children. Say Laura, do you think I oughta sing something?

They’ve also seen Bush strum the guitar while thousands waited for assistance they never received in the aftermath of Hurricane Katrina. It makes one wonder whether his sagging approval rating inspired the sudden interest in the plight of America’s poor.