Cadillac has put out its first ad specifically targeting the gay market, reports advertising watchdog Commercial Closet. It’s also the first gay-themed ad for GM, although Saab and Saturn (brands of GM) have been in it for ten years. 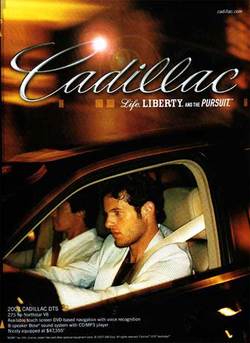 Reports Commercial Closet’s Mike Wilke: “The Cadillac print ad, part of the general market ‘Life. Liberty. And the Pursuit’ campaign from Modernista, Boston, features a scruffy driver in his 20s, dressed in a black shirt with a Miami Vice-style jacket, accompanied by another man riding in a black DTS. ‘We wanted to put a face on the brand,’ says John Gasloli, national advertising manager for Cadillac. ‘We previously focused on the product and wanted to pull in more of the emotional.’ The new ad was shot simultaneously with the general market campaign, Gasloli explains, where ‘we cast a large cross section of people, with a variety of ages, gender groupings and looks.’ For the Cadillac DTS, the photo shoot included four young guys and two young guys together, he says. ‘I was on the shoot looking ahead to our print buy, knowing we’d be in Out, The Advocate and Instinct, but it happened naturally and organically,’ Gasloli says. Yet special casting for the gay ad wasn’t a consideration, the openly gay Gasloli says. ‘As a gay male, what is the ‘gay look?’ In my opinion, it only becomes a stereotype.'”

Fairly subtle marketing, imho. But, you know, at least it’s not a pink Cadillac.

You may also want to check out Commercial Closet’s 2007 Images in Advertising Awards nominees. Winners to be announced on June 11 in New York.