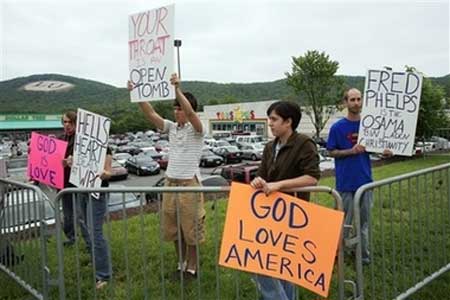 Mark David Uhl, a Liberty University student, was arrested after a family member’s tip led authorities to homemade bombs in the trunk of his car. Uhl had apparently told the family member that he planned to target protestors from Fred Phelps’ Westboro Baptist Church who were planning a demonstration at Reverend Jerry Falwell’s funeral. The soda can-sized bombs were described by police as “sort of like napalm”. 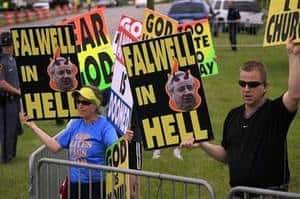 The Associated Press reports: “The Kansas-based Westboro Baptist Church sent about a dozen members to protest across the street from the funeral, claiming Falwell was a friend to gays. The group also has picketed soldiers’ burials, claiming the deaths are God’s punishment for a nation that supports homosexuality. Falwell frequently spoke against homosexuality, and gay rights advocates have consistently opposed him. A group of Liberty University students staged a counterprotest; it wasn’t clear whether Uhl was involved.

…Jesse Benson, 19, of Zanesville, Ohio, said he lived with Uhl this year and that both shared the view that the Westboro group is a ‘sorry, disgraceful bunch of people,’ but that he was certain Uhl would never have done anything to harm them. ‘He had a very, very deep respect for Jerry Falwell, as do I,’ Benson said in a telephone interview. ‘Jerry Falwell would not have approved him harming anybody for any reason. Out of respect for Jerry Falwell, he never would have done anything.'”

Just one more incident that goes to show how full this country is of really screwed-up, religious people.

The Associated Press reports that 33,000 people viewed Falwell’s body over a period of four days.