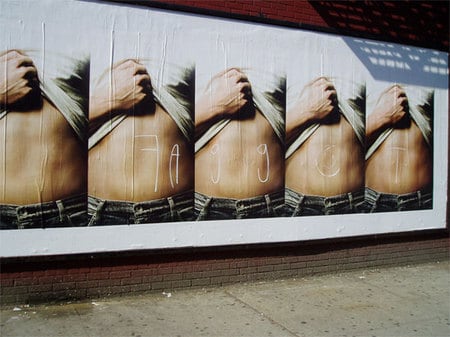 Towleroad reader Dean Kurth sent us a photo he shot while taking his morning run.

He writes: “As Pride banners are being readied for a month-long display on 8th Avenue in New York’s Chelsea district, less than a block away we have this disturbing image. The ‘artist’ who chalked the word ‘faggot’ onto this 19th Street billboard clearly wanted to send a message to the neighborhood’s many gay residents. The defaced poster hangs just around the corner from several of 9th Avenue’s gay owned stores, salons and the ever-popular Billy’s bakery.”

Some have heard about an increase in gay-related assaults in the area. As Hell’s Kitchen becomes the new Chelsea, is Chelsea becoming the old Hell’s Kitchen?

ADDENDUM: Commenters note that the ad is a promo for Kyle XY and the sexuality of the show’s star, Matt Dallas, has been the subject of speculation. Perhaps a message of backlash against Dallas…