While a People magazine cover may be the de rigeur method for celebrities to come out these days, some take a more subtle approach, such as burying the news in the 16th paragraph of an AP profile. 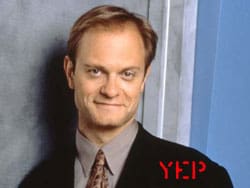 AfterElton notes that Pierce, heretofore reticent to discuss his sexuality, has his information offered up in a recent story on the actor:

“He worked at Playwrights Horizons, the Public Theater, Shakespeare in the Park and a lot of regional theaters such as the Guthrie in Minneapolis, Chicago’s Goodman and Long Wharf in New Haven, Conn. Pierce got to Los Angeles in the early 1990s when his partner, actor-writer-producer Brian Hargrove, wanted to write for television.”

While this is probably not earth-shattering news, it’s still worth noting that Mr. Hyde Pierce has broken out of that glass closet.