A pair of Flamingos in a long-term relationship in Britain have become the surrogate parents to an abandoned chick, news outlets reported today. 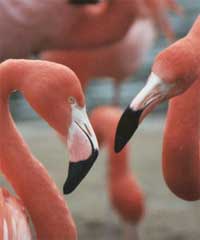 “Carlos and Fernando had been desperate to start a family, even chasing other flamingos from their nests to take over their eggs at the Wildfowl and Wetlands Trust (WWT) in Slimbridge near Bristol. But their egg-sitting prowess made them the top choice for taking an unhatched egg under their wings when one of the Greater Flamingo nests was abandoned. The couple, together for six years, can feed chicks by producing milk in their throats.”

This isn’t the first time we’ve heard of Carlos and Fernando! They made headlines last year for their cradle-robbing habits. At that time, the wildlife sanctuary noted that the pair is not harassed because of their sexuality: “They are not picked on by the other birds. If anything they are afforded more respect because two males together can be a pretty fearsome prospect for the other flamingos.”

You better believe it!