Deryk Schlessinger, the 21-year-old son of radio personality Dr. Laura (who as you may remember once called homosexuality a “biological error” and became the target of nationwide protests), has been linked to a MySpace page, now removed, replete with offensive imagery: 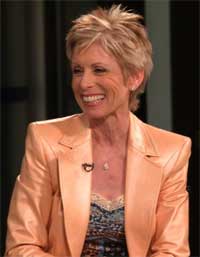 “The MySpace page, publicly available until Friday when it disappeared from the Internet, included cartoon depictions of rape, murder, torture and child molestation; photographs of soldiers with guns in their mouths; a photograph of a bound and blindfolded detainee captioned ‘My Sweet Little Habib’; accounts of illicit drug use; and a blog entry headlined by a series of obscenities and racial epithets…The site indicated Schlessinger’s team has survived numerous mortar, rocket and roadside bomb attacks. It also included several graphic cartoons. In one of the stick drawings, a top-hatted man laughs as he rapes a bound and bleeding woman in front of her family. In another depiction, a man forces a boy to perform oral sex at knifepoint as the child’s mother pleads for her son’s life. It’s unclear who created the cartoons, but Army spokesman Robert Tallman said the drawings ‘are repulsive and not anywhere near being acceptable,’ for a soldier’s personal Web page.”

Dr. Laura hosts a call-in radio show focusing on what she considers proper morals, values, and ethics in modern society.

According to the Salt Lake Tribune, “The Pentagon last week shut down access to a variety of video-sharing and social networking Internet sites, including MySpace, on its computer systems worldwide. Officials said the change was made to enhance security and protect a strained bandwidth, but critics worried that it might close a public window into the lives of deployed U.S. troops, some of which can be raw, frightening, violent and revealing.”

Deryk Schlessinger is currently deployed overseas. Laura Schlessinger’s spokesman asked the media to respect the soldier’s privacy and said the MySpace page might be a fake. One military official seemed to agree. Army spokesman Robert Tallman: “It may be possible that our enemies are actually behind this. Our enemies are adaptive, technologically sophisticated, and truly understand the importance of the information battlespace. Sadly, they will use that space to promulgate and disseminate untrue propaganda.”