A 38-year-old gay man was reportedly assaulted in Amsterdam Thursday night and taunted for several hours by a group of teenagers, his boyfriend told The Telegraaf. 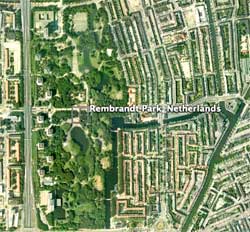 Said Jeroen Bulterman: “We had dinner at my mother’s and I went home. My partner Alexander stayed a bit longer and as he was walking home at about 12.30 he was pushed to the ground by three Moroccan teenagers near the park. The boys stayed on the side of the water and threw branches and whatever else was at hand at him. My boyfriend had to try to avoid getting hit in the pitch dark and it’s a miracle he wasn’t hit. He was scared to death, he heard the three talking to each other in Arabic and thought they planned to do the worst to him. Alexander feels he must have been swimming around in the pond for about two hours before a car with bright headlights arrived at the scene. The boys got scared and ran off. Maybe something like this has happened to other people recently and they haven’t dared to file a report. I urge them to come forward, so that the police will have more information in tracking down the perpetrators.”

It’s unclear whether or not the attack was related to the fact that the man is gay. Police report the victim to be “very traumatised.”

You may have missed…
Chris Crain Appears on Dutch TV [tr]