George Michael told a court today that “tiredness and prescribed drugs” were at the root of an incident last October in which police found him slumped behind the wheel of his car. 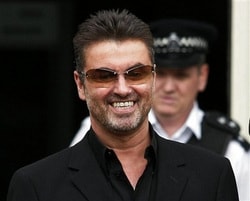 According to the Daily Mail: “Two witnesses who were driving behind Michael’s car…three ambulance personnel and two police officers were at court ready to give evidence if necessary. Andrew Torrigton, prosecuting, said he would not accept Michael’s basis of plea that he was only unfit to drive because of prescribed medication, pending further analysis of the singer’s blood samples, which could take several weeks. As a result the trial would continue. Earlier there had been comic exchanges as Michael entered the wrong plea and apologised profusely to the judge. When the charge that he was unfit to drive through drugs was put to him he replied ‘Not guilty’. His lawyer Brian Spiro shot him a glance full of horror, the singer realised his mistake and said: ‘No? Guilty. I am sorry, your honour.'”

Said Michael to the judge in Brent Magistrates’ Court: “I am perfectly aware that I did something very wrong and got into my car when I was unfit to drive. I was not in my normal physical state and I’m perfectly prepared to accept the correct punishment for that and I would have accepted it a long time ago. It was fairly predictable considering how much work I had done that week.”

Michael is set to begin a European Tour which will see him christening London’s new Wembley Stadium on June 9th. He had been ordered to appear before the court on June 8th. No word on whether that date still holds.