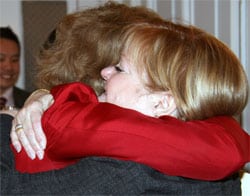 President Bush has threatened to veto the bill. It would be the third veto of his presidency, after stem cell research and the Iraq war funding bill. Wonkette makes note of his ugly legacy.

Both Joe.My.God and Bilerico have lists of how the voting went in both parties.

Think Progress noted some of the misinformation being perpetuated by House Minority Leader John Boehner and other conservatives before the vote, including Boehner’s statement that the bill takes us somewhere “very scary”:

“Today, House Minority Leader John Boehner (R-OH) reiterated this far-right talking point. He claimed that under the hate crimes bill, you would be charged with a crime if you were ‘thinking something bad’ before you committed a crime against someone. ‘I just think it takes us down a path that is very scary.’ The right-wing is wrong. This legislation goes after criminal action, like physical assaults, not name-calling or verbal abuse. The bill clearly states that ‘evidence of expression or associations of the defendant may not be introduced as substantive evidence at trial, unless the evidence specifically relates to that offense.'” 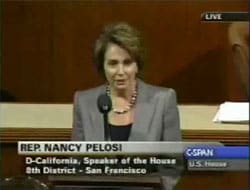 AmericaBlog has a round-up of some of the statements made by other legislators before the vote, including Steny Hoyer, Nancy Pelosi, and Rahm Emanuel. According to AmericaBlog: “Steny Hoyer and John Conyers just pulled a fast one on the GOP. The GOP has been refusing to support the hate crimes bill because it doesn’t include members of the US Armed Forces and senior citizens. Conyers just rose and basically said, okay, I’ll add them. The Republicans’ response? Uh, no. The Republicans have been railing for days about how this legislation doesn’t cover our Armed Forces and senior citizens, and now that the Dems offer to put our Armed Forces and seniors in this legislation, the Republicans said no and affirmatively stopped the Democrats from doing it anyway.”