Following March elections in which Parti Québécois had its poorest showing in decades, openly gay leader Andre Boisclair bowed to pressure and resigned today. Boisclair’s party appeared to have little faith left in his ability to push for a third referendum on independence for the French-Canadian province. 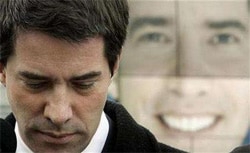 Said Boisclair: “I would have loved to be the leader of the party. It’s not possible for me. Somebody else will have to do it.”

Boisclair’s tenure has been a unique one, notes the International Herald Tribune: “When he was elected leader of the Parti Quebecois in November 2005, Boisclair, 41, made headlines for being openly gay and admitting to using cocaine while serving as a cabinet minister. His relative youth also marked a stark departure from previous sovereignty leaders, most of whom traced their roots to the PQ’s founding in the late-1960s.”

Last November, Boisclair was criticized for participating in a skit on Canadian TV which used Brokeback Mountain to parody the relationship between George Bush and Canadian Prime Minister Stephen Harper. The sketch featured Bush and Harper shirtless inside a pup tent. George Bush fondles his nipples before throwing two cherries at Harper. The cherries then appear strategically placed atop two mounds of whipped cream on Harper’s chest. The tent unzips and Boisclair, peeking his head through, says “Quebec won’t get mixed up in something like that.”

According to the IHT, “Boisclair fought back tears at the press conference announcing his resignation. He said the sovereignty movement would rebound. ‘I’m deeply convinced that this brave nation will assume its freedom,’ he said.”