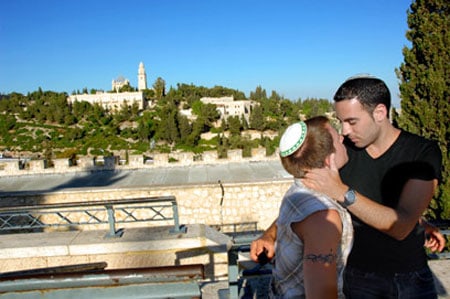 A new ad campaign put together by the Israeli Tourism Ministry meant to attract gay and lesbian visitors to the Holy Land has angered religious lawmakers, with the right-wing National Union party threatening to file a no-confidence motion to the Knesset, according to Ynet News.

Said Deputy Prime Minister Eli Yishai: “I unequivocally reject the attempt to focus a state-sponsored campaign on a delusional minority that suffers from a normative defect. Jerusalem and Amsterdam are the same for these people. Therefore, those who fail to recognize Jerusalem’s holiness had better stay away from it.” 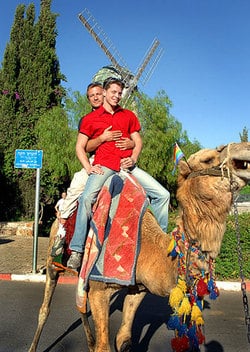 The paper reports that the campaign is similar to what other international cities have done to attract gay visitors: “The photos for the campaign was taken in many sites throughout Israel, including Jerusalem and the Dead Sea. ‘I chose sites that represent the country,’ said Eitan Tal, the campaign’s photographer, ‘in Jerusalem the models wore yarmulkes for the religious GLBT crowd. In the Dead Sea I shot the models floating in the water holding hands with tiny trunks on. I am happy I was able to assist in the effort to improve the country’s economy.’ Campaign managers also launched an internet site with information about clubs, bars, restaurants, hotels and airlines offering service to Israel. In the future, they plan to add ‘Proud’ travel packages especially designed to fit the needs of the gay visitors.”

After receiving a complaint from a former tourism minister, the current tourism minister Yitzhak Aharonovitch said the campaign was initiated by his predecessor and that he planned an order to stop it. In fact, yesterday Tourism Ministry officials issued a statement denying any connection to the campaign, saying it was part of an old campaign put together by the Tel Aviv Hotel Association. Said the statement: “The Tourism Ministry regards all segments of the population as equals, and therefore each group… receives the same treatment.”

Another former tourism minister, MK Yitzhak Levy, chimed in: “I protest the portrayal of Israel as a pink, namely – gay, paradise. Israel used to be famous for values and holiness, and here a red line has been crossed.” 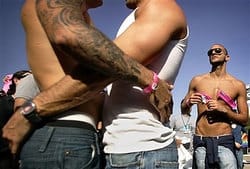 Said Shlomo Rosenstein, a member of the Jerusalem city council representing the United Torah Judaism: “The Jerusalem municipality and the haredi coalition are doing their utmost to maintain the peaceful atmosphere in town, which has proved itself in the last three years. Provocations will do no nothing for Jerusalem but undermine the status-quo and coexistence within the fragile fabric of life and relations between the different sectors in Jerusalem. I’m surprised that the Tourism Ministry and the person heading it chose to destroy, rather than build. This campaign is disgusting and will drive tourists away from Jerusalem and Israel.”

Meanwhile, conservative lawmakers in Israel are cracking down on a gay pride festival and parade planned for next month: “The Ministers Committee for Legislation voted Sunday in favor of a bill that would prevent gay groups from holding pride parades in Jerusalem. The draft bill will be put up for a vote in the Knesset on Wednesday and if approved will effectively render next month’s gay pride parade in the capital illegal.” 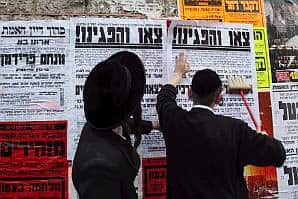 In April, a medium-sized bomb went off in Jerusalem, presumably detonated by ultra-orthodox Haredi Jews upset by the organizers’ request for a permit for the parade. Last year’s gay pride festival went off as a stadium event after weeks of rioting and threats of violence caused police to restrict it to a safer venue.

The Jerusalem Post reported on Monday that the Haredi have already begun to make threats against the gay parade, scheduled for June 21.

Said Shmuel Popenheim, a spokesman for the Edah Haredit: “There will be strong opposition to those sinners’ intention to desecrate the holy city. If they insist on flaunting themselves we will be forced to come out in force against them.”