Lesbian singer Beth Ditto, who appears naked on the cover of this week’s New Music Express, says gay men are to blame for the preponderance of ultra-skinny female celebrities and models who put pressure on women to be thin. 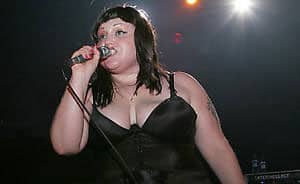 Said Ditto: “If there’s anyone to blame for size zero, it’s not women. Blame gay men who work in the fashion industry and want these women as dolls. Men don’t know what it feels like to be a woman and be expected to look a particular way. The Beckhams are part of the machine, Paris Hilton is part of the machine. There’s that thing Paris Hilton said about Lindsay Lohan, ‘You’re poor, ugly and fat.’ It’s always women who are victims…I spent one night talking to Kate Moss and she said the most amazing things about bodies. I didn’t think I was going to like her, but she said, ‘Do you know what I hate, Beth? When people tell my big girlfriends, ‘You have a beautiful face…’ That’s a really radical concept.”