Moorhead, Minnesota Student Paul Marquardt, who said he was attacked last week by a group of men who confronted him with anti-gay slurs and beat him now says that the attack had nothing to do with his sexual orientation. 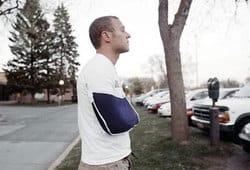 Said Deputy Police Chief Bob Larson: “Marquardt told investigators that he was not confronted, nor did he hear any anti-gay comments. He told us that the story had gotten away from him.”

The Minnesota activist group Ten Percent Society, which had rallied to Marquardt’s cause and planned a march to support him, canceled it. Said their spokesman James Sink: To claim something is a bias-motivated crime when it’s not is extremely serious. It’s unfortunate it had to happen in this case. The thing that we’re most concerned about is preserving the legitimacy of the organization and making people, and students of course, feel that it’s appropriate to go to the police if you feel you’ve been a victim of a crime.”