15-year-old girls charged with felony hate crimes for targeting one of their male classmates with homophobic flyers. 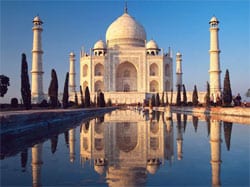 Taj Mahal to get facial: “According to the BBC, Indian officials have concluded that a ‘deep-cleansing mud pack may be the only way to return a yellowing Taj Mahal to the cultural landmark’s former white marble glory.’ By ‘caking the building in clay,’ we read, those same officials can actually ‘draw out surface impurities’.

Paris Hilton gets lighter sentence – should be in the coop for only 23 days, if that: “The L.A. County sheriff’s office announced that they recognize her good behavior including showing up at her recent court date. Paris will also serve her 23-days in a special unit. These cells are specifically reserved for high-profile inmates who might otherwise be targeted by fellow prisoners. She will also get an hour a day to make phone calls, watch TV and shower.”

Homeless gay youths finding home in specialized shelters: “Many experts estimate that while gay men and lesbians make up 3 percent to 5 percent of the general population, more than 20 percent of homeless youths under age 21 in many urban areas are gay, according to recent surveys of street youths and shelter workers published in peer-reviewed academic journals, and a study released in January by the National Gay and Lesbian Task Force and the National Coalition for the Homeless.”

How the GOP candidates responded to Falwell’s death — 5 strong supporters, 3 weak supporters, two made no comment at all. 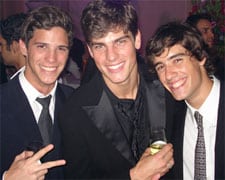 In case you were wondering, your prayers have helped Britney Spears.

West Hollywood gay activist Larry Sprenger dies at 65: “In the mid-1980s, Sprenger was co-chairman of the Municipal Elections Committee of Los Angeles, then one of the nation’s most influential gay political groups. He was instrumental in the group’s controversial stand in 1985 urging the owners of gay bathhouses to voluntarily shut down their operations because of the baths’ possible role in the spread of AIDS.”

Amazon to challenge iTunes with DRM-free music download service: “The Amazon service will launch later this year with support from EMI, the third-largest record company, and more than 1,000 smaller labels…David Card, an analyst at Jupiter Research, said Amazon’s clout would increase the pressure on EMI’s competitors to follow suit. ‘Getting another big, big player to endorse DRM-free is a big deal.'”