Vote on proposed constitutional amendment to ban gay marriage in Massachusetts has been postponed until at least June 14th: “Before it can reach the 2008 ballot, the proposed amendment needs the backing of 25 percent — or at least 50 lawmakers — in two successive sittings of the Legislature. It won approval in the previous Legislature in January. Those opposed and in support of gay marriage agree that based on past votes and the stated positions of incoming lawmakers, about 57 support the amendment. There are 200 lawmakers in the House and Senate.” 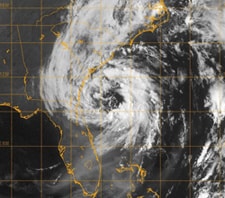 Subtropical storm Andrea, the first named storm of the season even though the season doesn’t officially start until June 1, is dissipating off the Atlantic coast.

Val Kilmer has turned into a daddy bear.

NYC gay millionaire Steven Green, jailed for being one of the city’s worst landlords and sentenced in February to 33 months for tax evasion and real estate fraud, was recently hit by a car.

Helsinki, Finland is hosting this year’s Eurovision Song Contest, the gayest pop show on the planet: “If you took the talent portion from the Miss America pageant and crossed it with American Idol, the end result would look a lot like Eurovision (or ESC, as fans like to call it). It’s all about being big, bombastic and noticeable.”

Previous Post: « British PM Tony Blair to Step Down After a Decade in Power
Next Post: Towleroad Guide to the Tube #127 »