The Honda Civic belonging to Trevor Charles Brewster, whose body was discovered in a reputed gay cruising area near Halifax, Nova Scotia, is still missing and police hope it contains clues about who may have killed him: 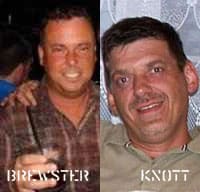 “Brewster’s car was seen the night before he was reported missing by police in Cole Harbour who noticed the vehicle making a minor driving infraction. Brewster was reported missing May 8 when he failed to show up for work as a waiter at the Steak and Stein restaurant in Halifax. How Brewster died hasn’t been revealed by investigators. Police consider the car to be a vital clue in finding Brewster’s murderer. Police forces outside of Nova Scotia have been asked to be on the lookout for the Honda with a distinctive rainbow teddy bear decal on the trunk. Investigators say they’re encouraged by several recent tips they’ve received.”