The Reverend Jerry Falwell has died after being found “unresponsive” in his office at Liberty University this morning. He was rushed to the hospital according to MSNBC: 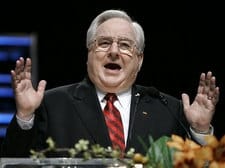 “Ron Godwin, Liberty’s executive vice president, said Falwell, 73, had been found unresponsive around 10:45 a.m. and was taken to Lynchburg General Hospital. Godwin said he was not sure what caused the collapse, but noted that Falwell ‘has a history of heart challenges.’…’I had breakfast with him, and he was fine at breakfast,’ Godwin said. ‘He went to his office, I went to mine and they found him unresponsive.’ Falwell, a television evangelist who founded the Moral Majority in 1979, became the face of the religious right in the 1980s. He later founded the conservative Liberty University and served as its chancellor.”

The televangelist had a long history of spewing hate toward the gay community. During the AIDS crisis he declared, “AIDS is the wrath of a just God against homosexuals.” And following 9/11 he appeared on Pat Robertson’s 700 Club and said “I really believe that the pagans, and the abortionists, and the feminists, and the gays and the lesbians who are actively trying to make that an alternative lifestyle, the ACLU, People For the American Way, all of them who have tried to secularize America. I point the finger in their face and say ‘you helped this happen.'”

Falwell was pronounced dead just after noon after CPR and other efforts to revive him failed.