The judge in George Michael’s drug-driving case delayed his sentence until June 8th, the day before Michael is to play the new Wembley Stadium, but not before the court heard about the “cocktail of drugs” that was found in his system after police discovered him slumped over the wheel of his car in north London in October of last year: 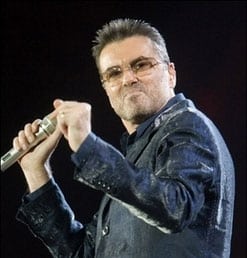 “Prosecutor Andrew Torrington told Brent magistrates court that tests showed the 43-year-old singer, who admitted driving while unfit earlier this month, had a sleeping drug and a therapeutic quantity of an anti-depressant in his system, as well as the illegal dance club drug GHB – a class C substance. Mr Torrington said cannabis was also found in his blood, but the prosecution did not maintain that this was the cause of his intoxication.”

Michael was not present at today’s hearing, though his attorney Michael Grieve argued that prescription drugs and not illegal substances were the cause of his client’s state that night:

“[Grieve] said there was a strong body of opinion that said a sleeping drug was the most likely explanation for his state. He added it was common ground that GHB could be present in the blood without any illegal substances having been taken. The court heard that while GHB was banned, its effects could be created by legal substances, including a drug called GBL. Mr Grieve agreed with the district judge, Katherine Marshall, that the level of the singer’s unfitness could be viewed as high. He said there was no dispute as to the description of the singer’s condition as being semi-conscious at the wheel. But in terms of considering sentence, he told the district judge: ‘One looks at the unfitness, not the cause of it. Whatever the level is, that’s all you need to look at.'”

Michael is expected to receive a more lenient sentence because he entered a guilty plea and because it would be a first-time conviction. Normally, the maximum sentence in the case would be six months of jail time.