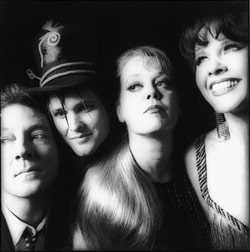 The B-52s have come out of hiding and are wrapping up a new album.

Said singer Fred Schneider: “We all lived down [in our former hometown of Athens, Georgia] for two months and just got back in the swing of things. After the ‘Cosmic Thing’ and ‘Good Stuff’ tours (in 1989 and 1992), we were a little burned out. We just had our ins and outs and things going on. It took a while for things to fall back into place.”

The group plans to release the album early next year. They’ll be previewing the new music on a set of tour dates this summer. Of the new eleven tracks, Schneider said: “There’s more electronica on it. It’s up-tempo and a bit sexed-up. It’s sexier than ever.”