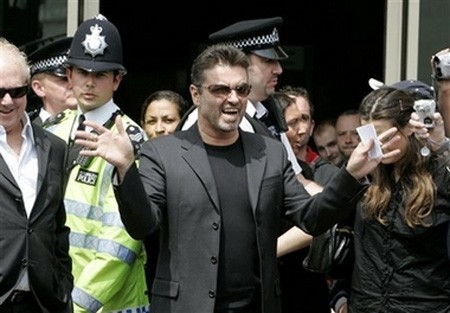 George Michael arrived at Brent Magistrates Court this morning, where District Judge Katherine Marshall said that she had ruled out a prison sentence for the singer.

Instead, the judge banned Michael from driving for two years and ordered him to complete 100 hours of community service.

According to the Daily Mail, “As Michael left the court, he told the assembled media that he would not answer any questions. He posed for waiting photographers, and then read a short statement. In his statement he called the ‘media coverage of this trial farcical’, and said he fully accepted responsibility for being guilty of the charge due to “tiredness” and his use of ‘prescription drugs’. Michael added he was glad to put the trial behind him, and was now off ‘to play the biggest show of my life at Wembley.'”

Last week, the court heard about the results of a drug test given to Michael following the incident. They reported that levels of cannabis, GHB, a “therapeutic quantity” of an anti-depressant, and a sleep drug were all detected in Michael’s blood. 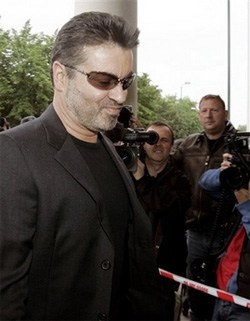 In a frank interview with the UK’s Gay Times due to hit newsstands at the end of the month, Michael talks about his childhood:

“My mother had this fear of me being gay. She had this definite fear that I was going to be like her brother – she thought that it meant I wouldn’t cope with life. She almost felt like she had brought this gene. So there were very pointed areas where she let my dad be – supposedly protectively – homophobic. There was this gay waiter who lived above our family restaurant and I wasn’t allowed to go to the top flat when he was in the restaurant. You know, in case I caught something. In case I caught gay. Knowing my father, he couldn’t even consider he had a gay son because he is of his generation, a Greek Cypriot man. But my mother was afraid of my father’s judgment of me. I also now realise she was afraid that if the ‘gene’ was in me it would turn out the same way for me as it had for [my late uncle] Colin. My mother didn’t talk about her brother until I was 16. I don’t know if that was a decision on her part or whether she just plucked up the courage. It changed my opinion of her entirely because it wasn’t just that – she’s also seen her own father die the same way. They’d both put their heads in the gas oven. And, lucky old Mum, she found both of them. She spent years being so remorseful that it’s impossible to hold that time against her. And in the last 20 years of her life, I don’t think we had a cross word actually.” 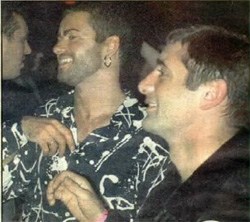 He also talks about his partner Anselmo, who died of complications from AIDS in 1993:

“I sat at the table not knowing if this man I was in love with was terminally ill and not knowing whether I was terminally ill. It was possibly the loneliest time of my life. I wrote [my parents] a four-page letter which was the easiest thing I’ve ever written considering it was the only unresolved issue – to come out to my parents. My mum said it was the most beautiful letter she had ever read, that it explained completely how I felt and why she didn’t have to worry about me. It was the easiest thing that should have been the most difficult.”

Michael also talks about his Wham! partner Andrew Ridgely and says the two never slept together, despite rumors: “Andrew loved camp clothes. He’d go to school in cherry silk trousers and have three little Adam Ant braids. Everyone spent their time going: ‘Is he gay?’ And I’d go: ‘He’s really not!’ He was beautiful but not in a way that was going to attract me. He was too pretty, too feminine, too elegant. I can understand everyone thinking we were sleeping together – but he loves women.”

Michael is set to be the first artist to play the new Wembley Stadium, in two concerts this weekend.