John and Elizabeth Edwards were on The Tonight Show last night and the presidential hopeful told Jay Leno that he does have a difference of opinion with his wife when it comes to gay marriage. 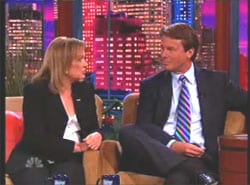 Elizabeth Edwards appeared at a breakfast event for the Alice B. Toklas Lesbian Gay Bisexual and Transgender Democratic Club at San Francisco’s Gay Pride last week and told reporters after her keynote speech: “I don’t know why somebody else’s marriage has anything to do with me. I’m completely comfortable with gay marriage…If he’s pleasant to me on the street, if his children don’t throw things in my yard, then I’m happy. It seems to me we’re making issues of things that honestly … don’t matter.”

John Edwards told Leno: “It’s not the only thing we disagree about. She actually says what she thinks…A lot of people I love and care about feel the same way Elizabeth does. I’m very strong about ending discrimination against gay and lesbian couples. But I’m not quite where Elizabeth is yet.”