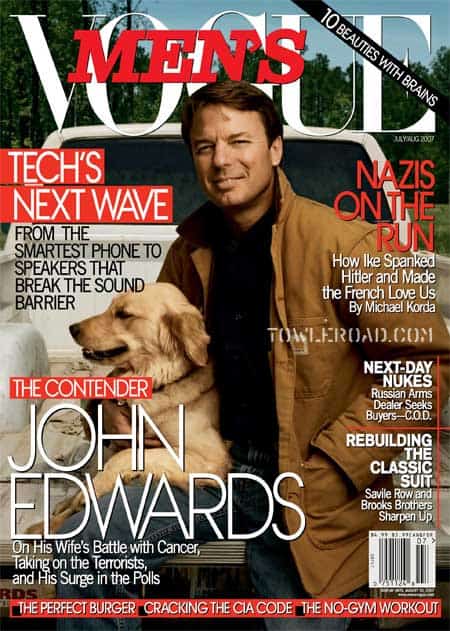 John Edwards gets the Annie Leibovitz treatment, flaunting his dashing self (and a haircut of undetermined cost) on the July/Aug cover of Men’s Vogue.

“Edwards paces the small platform, explaining how he’ll fight corporate farming, funnel capital to rural schools and businesses, and expand broadband access to out-of-the-way places. The rural South is where he’s from, after all—the town of Robbins, North Carolina, population 1,200. In America, he says, ‘people like me can come from nowhere, the son of a mill worker…and now be running for president of the United States and pay $400 for a haircut!’ The Iowans erupt in laughter, a great gale of relief. ‘You like that, do you?’ Edwards says, grinning. A white-haired 56-year-old named Marilyn, who had noted beforehand that $400 haircuts are ‘harder for people from the Midwest to understand,’ turns and gives a furtive thumbs-up. ‘He’s good!’ she whispers. Indeed he is. By the time he’s updated the crowd on his wife Elizabeth’s battle with cancer and uttered his can’t-lose, heat-seeking campaign line—’It’s time for Americans to be patriotic about something other than war!’—Edwards has won over the room, totally and completely. Asked about the haircut by the Iowa press afterward, Edwards, hand on hip, eyes squinting in the sun, says, ‘My whole life has been spent standing up for people who have no voice, and I’ll do that as long as I’m alive. It’s a ridiculous amount of money for a haircut. I’m actually embarrassed by it.'”

Previous Post: « A First Look at Where the Wild Things Are
Next Post: Flash Forward: Harrison Ford as Indiana Jones »