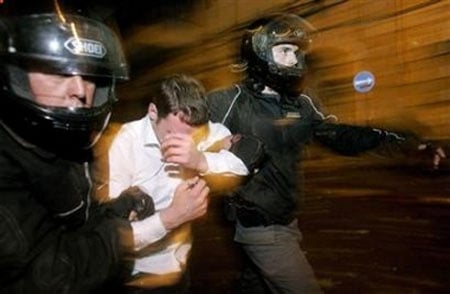 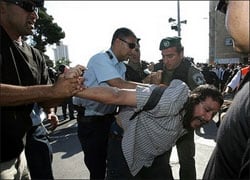 As Jerusalem braced for a gay pride event that in the past has been bloody and violent, police seized a man with a bomb before he could get to the thousands participating in today’s parade.

Others, who managed to break through the massive police presence, estimated to be 7,000 strong, were arrested and taken away. 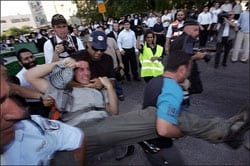 Reuters reports: “A rally planned to take place at the end of the parade was cancelled…following a dispute between the organizers and the Jerusalem city authorities. Police have arrested more than 130 ultra-Orthodox Jews in recent days after learning of plots to disrupt the march and during protests in Jerusalem and religious Jewish towns, where officers used water cannon to battle stone-throwing protesters.”

In April, a medium-sized bomb was detonated in protest of the planned parade, injuring one person. Earlier this month, Haredi rabbis placed a curse on those participating:

“To all those involved, sinners in spirit, and whoever helps and protects them, may they feel a curse on their souls, may it plague them and may evil pursue them; they will not be requitted of their transgressions from heavenly judgment.”