Seattle man beaten by group after being taunted with a gay slur: “On Sunday, the couple was together about 2:40 a.m. in the 700 block of East Pike Street when they heard someone utter a slur toward gay men, according to a police report. The victim, a man in his 20s, turned and approached the man who made the comment. That man, who was with a group, punched the victim and threw him to the ground, at which point four to six others joined in the attack, according to a police report. The victim suffered a cut behind his left ear. Firefighters treated him at the scene, a police report said. The group ran to a nearby car and sped away.” 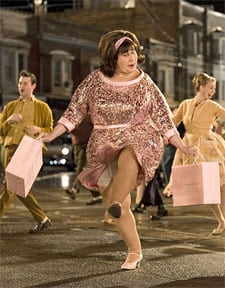 Some gay fans call for a boycott of Hairspray because of John Travolta, Scientology, and the cult’s position on gays.

Senate minority leader Mitch McConnell endorses Bush’s anti-gay Surgeon General nominee James Holsinger: “Dr. Holsinger is a proven leader who has dedicated his career to improving health education and services in Kentucky and across the nation. He is an excellent choice for Surgeon General and I look forward to his quick confirmation.”

Jake Gyllenhaal spends some time with his fans.

More on Armistead Maupin’s new tome Michael Tolliver Lives: “Instead of randy hippies who smoke joints, as they did when the series began in 1976, the aging lefties of ‘Michael Tolliver Lives’ pop joint and arthritis pills. Instead of plotting nightly sexual conquests, as they did as 20-something singles, many profess shock at the level of promiscuousness practiced by today’s youth.”

Anti-gay Republican presidential hopeful Tom Tancredo’s campaign webmaster Tyler Whitney is outed. Said Tancredo’s senior advisor Bay Buchanan: “A person’s sexual preference is a personal matter and has nothing to do with the campaign.” 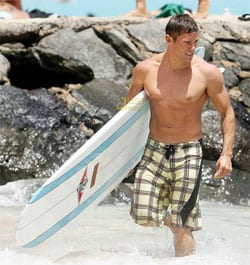 Bachelor Andy Baldwin takes to the surf in Hawaii.

U.S. States renamed for countries with similar GDPs. (via kottke)

NYC due for major hurricane, experts say: “The last hurricane to hit New York was the so-called Long Island Express in 1938. It killed 50 people on the Island, more than 700 along the Eastern seaboard. In the years since, hurricanes with names like Bob, Floyd, and Gloria, have also made an impact, but we’ve been spared a direct hit. Experts say a major hurricane could pack 130 mph winds, and a 30-foot storm surge. There would be flooding in all five boroughs, the subways and much of lower Manhattan could be under water. Damage estimates would top $100 billion.”

Ted Allen talks desert island cuisine: “First of all, I’m not eating Carson [Kressley]. He’d be all stringy. Carson is a little too lean. Tom Colicchio is a delicious-looking man, but I think I’d have to go with Rupert. Many of us in the community would find him the most delicious. If we’re on a desert island, I’d dig a pit. Something spicy or sort of Caribbean would be good for Rupert Everett.”

Kevin Spacey attended the Tony Awards after-party at the Hotel on Rivington’s penthouse with his dog Minnie.