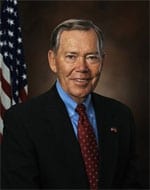 Democratic Wyoming Governor Dave Freudenthal will choose a replacement from three choices given to him by the Republican state central committee. His record on gay issues is what you might have expected. He voted ‘yes’ on a constitutional ban on same-sex marriage, voted ‘no’ on adding sexual orientation to definition of hate crimes, and voted ‘no’ on prohibiting job discrimination based on sexual orientation.