Three 19-year-old men in Lowell, Massachusetts were released without bail but given a nightly curfew after pleading innocent to attacking a gay man early Saturday morning. 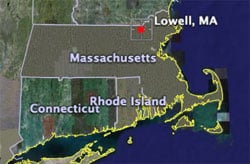 According to the Boston Globe, “The alleged assailants saw the man in a residential neighborhood at about 3 a.m. on Friday, and used anti gay slurs before beating him, authorities said. ‘We don’t want you in our neighborhood,’ one of the accused allegedly called out to the man. The three men, Jonathan Artis , Jeffrey Buchanan, and Jules Rugges , all age 19, face three charges: violation of constitutional rights with bodily injury, assault and battery, and mayhem. The victim, whose identity was withheld by authorities, went to police after the beating to describe his assailants. A short time later, police arrested three men fitting the description.”

The Lowell Sun offers another report, from the court hearing: “Police allege that at 3 a.m. on Saturday, James Nickola, 22, walked into the Lowell police station with his face covered in blood. He told officers that three men had begun to taunt him as he walked along Bridge Street in Lowell. They caught up with him on West Fourth Street where he was jumped and beaten while being called a ‘faggot.’ Two of the alleged attackers beat Nickola, while prosecutors say the third man urged them on.”

The attackers are apparently free on their own recognizance until a probable cause hearing on July 27.