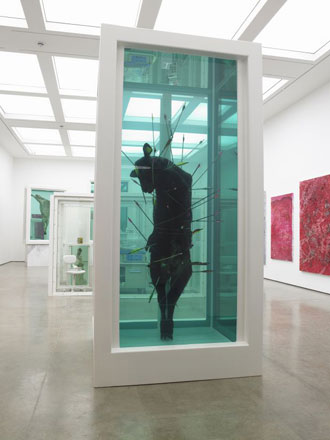 George Michael, who is said to have his eye on Damien Hirst’s diamond-encrusted skull, has gone ahead and opened his wallet for something a bit darker, a work by the artist entitled “Saint Sebastian, Exquisite Pain”:

“The installation features the body of a black calf pierced by dozens of arrows and attached with cable to a steel post, set in a tank of formaldehyde. The artwork is based on the story of the martyr Saint Sebastian, whose biblical story inspired the 1976 homo-erotic film ‘Sebastiane.’